I recently restarted some research into the connections between early Curd settlers in the US and my own branch of the family here in the UK. 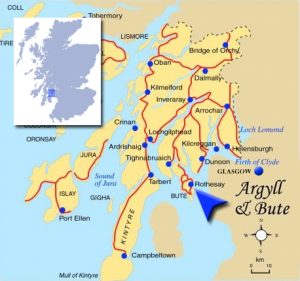 There are multiple mentions of connections between the US family and the Isle of Bute and Ireland, mainly on US websites, but I have never seen much more than passing references. However, while taking advantage of a “free” weekend’s access to www.findmypast.co.uk, I found an associated link between CURD, MAKUREDY and McCURDY.

Various links lead me to this page where there is a great deal of information particularly on the early McCURDY lines.

There is a warning at the beginning of the document regarding accuracy so please be careful if you use anything from the page(s) there.

Despite being a little difficult to unravel the tree structures in places, this is an informative document (about 30 A4 pages if printed) – I just hope to find a good link between the families CURD and McCURDY so that I can make solid connections.

I suspect this will come down to DNA at some point so I’d be very interested to hear from anyone called MAKUREDY or McCURDY. If you have any connection with these names please get in touch as I’m sure this can be cracked….

The Curd Things You Can Find On eBay!

By Brian on 15th January 2015 in Connections, Curd, Story

In the hope of finding some long lost family documentation, I sometimes type the family name into eBay. More often than not it’s Curd Jürgens memorabilia or jars of lemon curd and the odd book that turns up. Sometimes though, there are little gems.

Someone is selling copies of this picture which is strange as it’s available as a free download from  The Library of Congress. The info below is also available but, if anyone knows more about the house and its owner, I’d be very pleased to hear from them.

This old mansion located in Callaway County, 1.5 miles east of Auxvasse Missouri. It was built between the years 1840 and 1850 by Joe Lackland, one of the early settlers in this section of the country.

Mr Lackland was a farmer. He came from the State of Kentucky. The property was later purchased by Gen L Curd, who served in the Civil War.

At one time the building was used as a Girl’s Seminary.

This is a two story brick mansion, Colonial style containing 18 rooms. The house was built by slave labour.